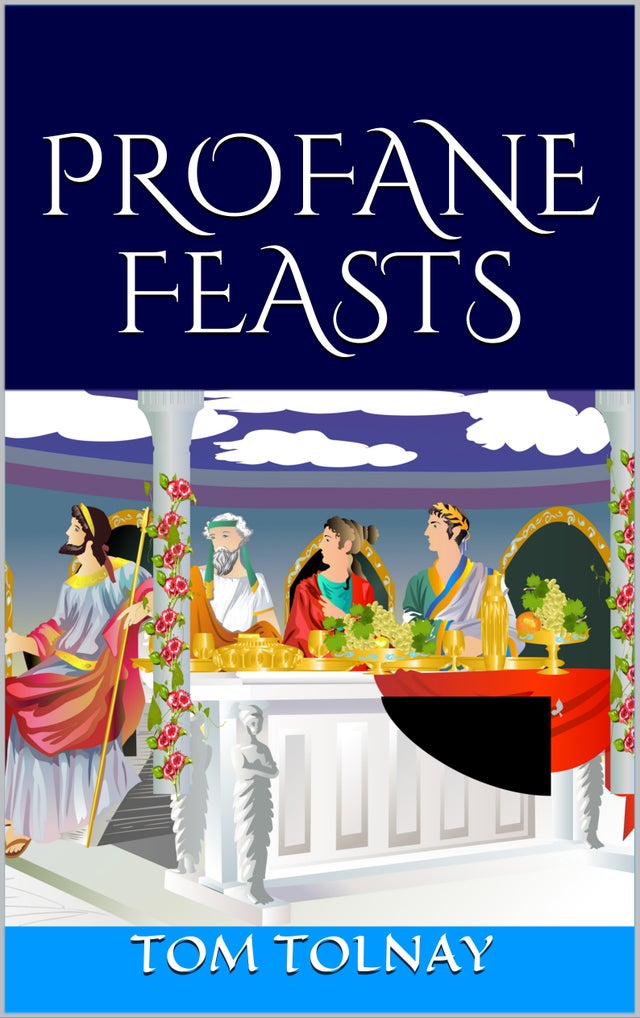 Profane Feasts, 13 stories by Tom Tolnay is a sequence of thirteen story-chapters focusing on a family of Greek immigrants who settled in Brooklyn, New York in the 1970s, with their misadventures extending up to the present day. With humanistic and humorous intent, the subplot follows the Hestiakos-Dropoulos family as part of an unconscious “movement” to reinvent the greatness of their ancient culture by “taking over” North America one coffee shop, one hot dog stand, one neighborhood at a time. The surface story line is how these individuals--each story focuses on a particular family member--make their way as transplanted products of that early great culture into the "upstart societies" thriving across the Atlantic. Subliminally their lost greatness makes them feel part of something important even though they are far removed, by time and circumstance, from the civilization upon which the western world was founded. The word “Feasts” in the book's title refers to various human “celebrations” which act as signposts in their journey, including a wedding, baptism, funeral, Christmas, Easter, Greek Independence Day. The “Profane” from the title refers to the wacky occurrences which arise as these celebrations unfurl or, in some instances, unravel...

Tom Tolnay is a writer whose keen insights into the myriad ways in which culture can shape character always make for rewarding reading. Nowhere is that more true than in these stories of a family of immigrant Greeks trying to assimilate to the streets of Brooklyn. Here you’ll find grit and tenderness, mystery and pathos, comedy and tragedy, and dreams fulfilled and unfulfilled. The characters are all beautifully drawn, and some are infused with such indomitable spirit that they lift off the page and remain in memory long after the cover is closed. Several of the stories have appeared in Ellery Queen’s Mystery Magazine. Taken together they comprise a “novel in stories,” a much bigger tale told with vivid prose, compelling style, and a lot of heart. —Janet Hutchings, Editor-in-Chief, Ellery Queen’s Mystery Magazine

"Tom Tolnay is a fine, tough-minded writer as Profane Feasts demonstrates once again. Tolnay has mastered the compressed language of the short story, which by leaving so much unsaid, is able to say so much more. These stories of a Greek immigrant family in New York are serious in the way that only humor can be serious. They are both funny and wise. I hope readers enjoy them as much as I did."--Gwendolyn Jensen, former President, Wilson College, author of Graceful Ghosts.

"Tom Tolnay never fails to bring a sense of wonder to his work. In Profane Feasts, thirteen tales of life among Greek immigrants in America seat the reader front and center…"--Philip Wagner, Editor-Publisher, The Iconoclast.

"The moods that prevail in this book of short stories are mostly humoristic and a sympathetic approach. The writer has been able to treat very serious themes like loss and death with a sense of skillful humor without any tinge of cruel mockery. These have been very well expressed in The Miracle of Uncle Stavros:

“Although I saw with my own eyes how it had happened, the spectacle of my dead uncle, sitting up, grinning queerly, gave me goose pimples.” (Page167).

To any reader which a clear logical mind a corpse suddenly becoming alive may bring some laughter for a while but at the same time there is a call to avoid any offensive criticism.

The language used by Tolnay in Profane Feasts is simple and yet each word and sentence has the effect of the eye - catcher and gradually becomes impregnated in the mind of the reader. The writing style has a spontaneous flow that makes it hard to put this book down once the very first page has been read.

Profane Feasts by eminent writer Tom Tolnay is undoubtedly an excellent read for short-story lovers and this must not be certainly missing from any bookshelf."